It’s not news to those of you in the teaching profession, but here are two new looks at empirical evidence that show teachers are earning less than they did in previous years and that the gap 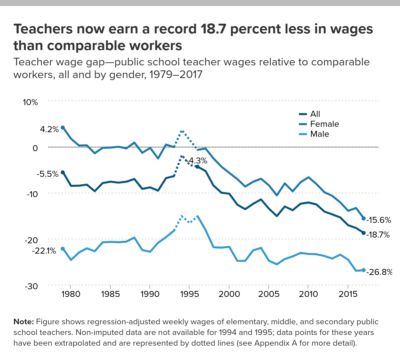 between teacher salaries and what comparable professions earn continues to grow.

First, here are a few findings in updated research from the Economic Policy Institute titled, “The teacher pay penalty has hit a new high: Trends in the teacher wage and compensation gaps through 2017.”

Wage penalties have grown significantly for both male and female teachers

While the study notes that the wage penalty is reduced by a “benefit advantage” (e.g. health care benefits) for many teachers–something Texas teachers may find hard to believe–it concludes that the benefit advantage “has not been enough to offset the growing wage penalty….The bottom line is that the teacher compensation penalty grew by 11.4 percentage points from 1994 to 2017.”

There’s a lot more to dig into with the study, but we’ll add one final disturbing stat: The wage penalty for texas teachers is 12th highest in the nation at a whopping 28.9 percent.

The second look is at an article in this week’s Guardian titled, “Teacher pay drops 5% in last decade – despite better qualified staff: New report shows teacher pay is declining, even as more educators have master’s degrees and doctorates.”

The article looks at a study from Michael Hanson at the Brown Center on Education Policy at the Brookings Institution, that notes:

The Guardian article is part of a series called The Guardian US Teacher Takeover, with teachers guest-editing the U.S. edition to highlight the crisis in American classrooms and rising teacher activism. Editors met with more than a dozen teachers at the AFT convention this summer to develop themes for the project. It includes original reporting as well as an opportunity for educators to contribute to an ongoing forum where they can describe what they need to help improve America’s schools. We encourage you follow the series, and we’ll be commenting on some of the stories in upcoming Hotlines as well.